St David’s – or St Davids, take your pick – may or may not be the smallest city in Britain. (You can see the debate here if you’re interested.) And St Davids Bookshop may or may not be the smallest bookshop in Britain (a 2011 Guardian supplement on indie bookshops certainly suggested that it might be) but it was, unarguably, the venue for the last of my #IndyBookTourCymru2019 events. Chris Taylor, owner of the lovely, quirky little bookshop and as kind and welcoming a gentleman as you could hope to meet, ventures no opinion on whether his premises can claim the ‘smallest’ title. However, as a member of the town council back in the mid 90s, he was certainly instrumental in the city reclaiming its civic identity, city status having been granted to St Davids in the 16th century and, subsequently, lost as part of local government reorganisations, in 1886.

Whether or not the bookshop is Britain’s most diminutive, it is undoubtedly small though, as one regular customer observed, it somehow manages to contain more than its size should reasonably allow, as if it belonged not on the threshold of St David’s Cathedral but in the precincts of Diagon Alley. 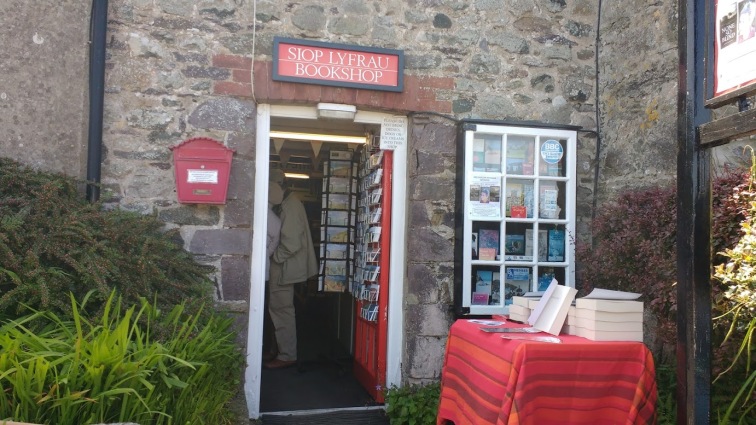 Physics of the normal bookselling world-defying or not, the bookshop is exceptionally well stocked with many books of local interest, maps, guides and tourist trails, novels both new and second hand and a well-curated children’s section in both Welsh and English. For the first time in a long while, I saw the Arthur Ransom books, in a beautiful modern edition, alongside Harry Potter and the Hunger Games series. Chris tells me that they sell as well as the newer series, especially Swallows and Amazons.

As it was a fine, warm day my signing table and I were outside, at the top of the steps up to the shop. Being right next to the entrance to the cathedral precincts, St Davids Bookshop is very well placed to attract tourists and locals alike and I found myself in conversation with people from Germany, the US and Scotland as well as festival-goers from the surrounding area and locals going about their day. One of the ladies I spoke to was from Southern California in the US. She bought a copy of None So Blind and asked whether she’d be able to buy In Two Minds from Amazon in the States if she wanted to follow the series. To my consternation, I realised wasn’t sure. I know it’s available as an ebook but, as I couldn’t promise her that she’d be able to buy a physical book, she bought a copy in case. (I must admit, I’d never had ignorance down as a marketing tool, before.) 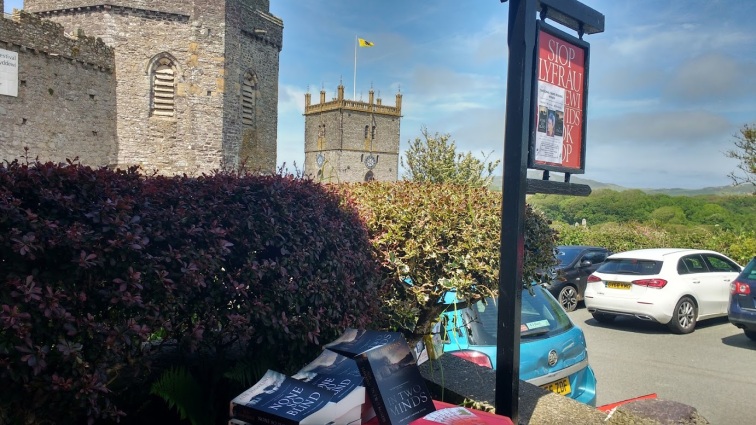 An astonishing number of people have bought None So Blind and In Two Minds together, which is possibly why I heard from my pubisher yesterday that both titles have gone into a further print run which was fantastic news. Of course, not all titles ordered in by bookshops are sold, and publishers and authors, alike, live in fear of high numbers of ‘returns’. (Bookshops mostly buying on a sale or return basis.) But, that having been said, a greater than anticipated demand can’t be a bad thing.

The sun shone while I was sitting outside St Davids Bookshop and, when I wasn’t chatting to customers, Chris entertained me with stories of the town and of bookselling escapades. He and his family have lived in St Davids for decades and, as mayor of the city twice, he knows its workings very well so our conversation was fascinating. We also talked books and publishing (inevitably) and Chris kindly made me a present of this month’s copy of The Bookseller which is devoted to Welsh publishing. It features not only Panther Publishing, home of one of Crime Cymru’s most recent members, but the author of a book which I’ve seen in every bookshop on my travels – Anne Cakebread and her Teach Your Dog Welsh. 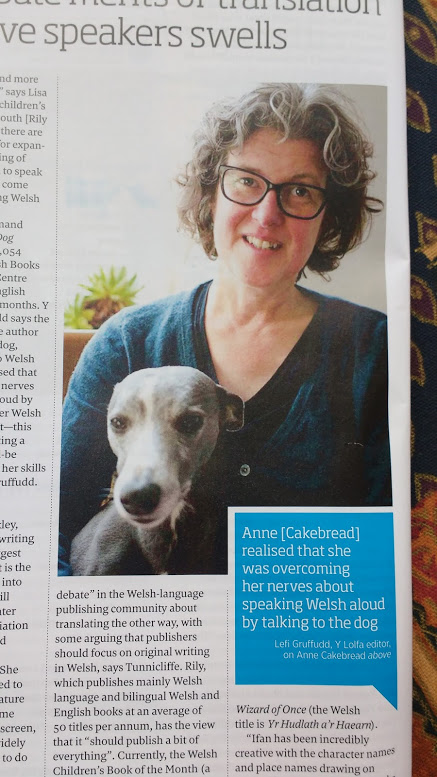 As the last bookshop on the tour in which I’m doing an event, it was pleasant to sit outside St Davids Bookshop in the few idle moments I had in two and a half hours and contemplate the different kinds of bookshop I’ve been to, what distinguishes them and what they have in common. Keep an eye out here for a round up of my thoughts on the whole of #IndyBookTourCymru2019 and what it’s taught me, early next week.

Many thanks to Chris for the wonderful welcome he gave me at his unique bookshop and to his brother, Ian, for the parking place at his house! I’m sure this won’t be my last visit.

Footnote: many thanks to freelance photographer Philip Clarke, who was in town to photograph the Festival, for the lovely photo of Chris and me.