The Black and The White

Now available to order here The Black and The White is the first of three books, linked by their characters, set during the fourteenth century.

A psychological thriller, the ‘elevator pitch’ for The Black and the White might be ‘Cormac McCarthy’s The Road meets Patricia Highsmith’s The Talented Mr Ripley‘.

Here’s what Amazon reviewers are saying about the book: 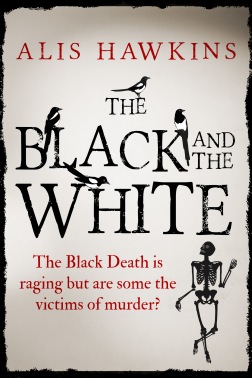 “The story of their journey is fascinating enough, through forests full of potential perils, fields left abandoned, devastated villages, facing desperation, suspicion, gullibility and greed in the people they meet. But even more impressive is the way in whic

h the reader is drawn into Martin’s faith, part church-taught, part naïve pagan folklore. He is a wholly convincing Medieval figure at a time when doubts were beginning to eat into long-held certainties. Alongside Martin’s faith is a sinister theme that is more timeless: the power of psychological manipulation…” (Suz M – 5 stars)

“All too many historical novels take pains to get the shoes right, but neglect the more important business of making the characters consistent with the setting. Few things are more frustrating than a 21st century sensibility in a 14th century story.
Alis Hawkins avoids this pitfall with a triumphant flourish. I can’t recall reading a historical novel which manages to capture the otherness of the past as strongly, while still creating memorable characters who rouse a full range of emotion in the reader. The Black and the White is a towering achievement.” (Tim Stretton – 5 stars)

“I was attracted to this title initially because I read Hawkins’ book None So Blind last year and it was one of my favourite reads of 2019. That book was set in 19th century Wales and so I wondered whether 14th century England would be as fascinating and well-realised.
Good news, it was. I was completely absorbed by Martin and Hob’s pilgrimage to Salster and felt the oppressive doom-laden atmosphere of the pestilence was very well done.” (V Halliday – 5 stars)

A Wolf In Sheep’s Clothing

The second in the fourteenth century trilogy is set in Salster just after the Plague of Children in 1361-2.

A minor character from The Black and The White comes to Saslter in search of the saint and, more importantly, her bearers.

Watch this space for updates on publication soon.

Testament is a split time narrative, with action taking place in both the late fourteenth century and the present day. Both timeframes concern Kineton and Dacre college – part of the medieval university in my fictitous city, Salster.

In 1385, master mason Simon of Kineton has two great desires – for a son to continue his name and  a commission worthy of his talent. In the same week, both seem to be granted to him but neither turns out as he had expected.

In the present day, Damia Miller is just beginning a new job as Marketing and Development manager for Kineton and Dacre college when a bizarre medieval wall painting is discovered in the college. What do the scenes represent? Who is the prisoner depicted in his strange cage? And what, if anything, does the wall painting have to do with the statue of the boy, believed to be the master mason’s son, who stands overlooking the college?

Originally published in 2008 by PanMacmillan, Testament has now been brought out in a new edition by Sapere Books. You can buy it in ebook or paperback here.