OK, I’m not sure whether I should be on day 5 (as in this is the fifth day I’ve visited a booshop) or day 8 as in, this is the 8th of May and the tour is going on for the whole of May. So I’m going for the latter.

My day 8 visit was to Siop Y Pentan in Carmarthen.

When I was a child, Carmarthen was our big shopping centre. Cardigan was OK for most things but it didn’t have a department store and, crucially, it didn’t have M&S. So, every quarter or so we’d head off down to Carmarthen. And always, always to do Christmas shopping. It was in Carmarthen that I learned to love the Salvation Army brass band’s rendition of the classic carols as dusk fell and people pulled their scarves tighter around their throats.

In recent times, the shape of the town has changed with new shopping centre areas and developments where the cattle market used to be. It’s a modern town now and Siop Y Pentan is in one of the newly devloped areas.

For those of you who don’t speak Welsh (and for some who do – I had to look it up!) Pentan means ‘chimney corner’ which I freely translate as ‘inglenook’. In other words somewhere warm and cosy where tea might be constantly available.

And so it proved. Like any good Welsh home (mine included) tea was offered almost as soon as Edwina and I walked through the door and a warm welcome and chat was provided from then on. The shop is run by Llio Davies and her son Brieg (that’s him in the photo below, with yours truly). Brieg does the day to day management while Llio manages events. Neither of them could have been more welcoming and my visit to Siop Y Pentan was like meeting up with old friends.

They introduced me to their customers, recommended people to be in touch with and made sure that I was going to pop in and say hi to Tim at College Street books in Ammanford where Llio lives (which I’d already planned on the way back home, after we’d had some lunch.) 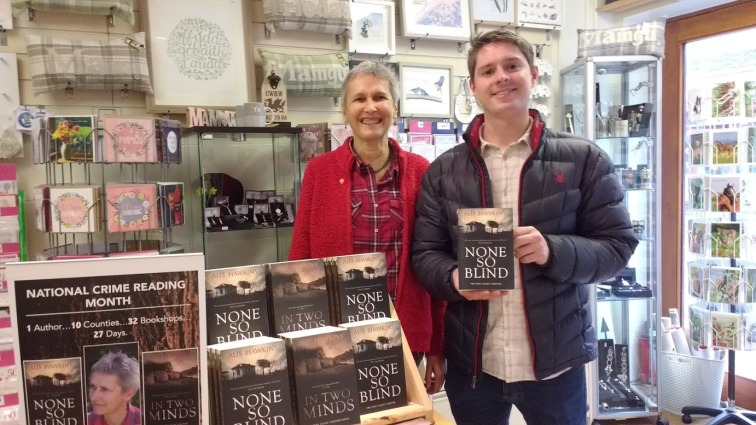 And I had such a great time chatting to people. I met somebody who’d been to the same secondary school as me (now known as Cardigan Secondary School but commonly referred to, in my day, as ‘The County’), a chap who’d been a bank inspector who knew the Lloyds bank in Coleford, where I now live, as well as crime fans and readers of historical fiction. It was fun and it was yet another chance to speak Welsh for an extended period and to feel more confident in doing so. I must have spoken Welsh more in the last week than I have in the last three years put together.

And, as I have in pretty much every bookshop I’ve visited, I bought a book. Here it was ‘Wales, The First and Final Colony’ by Adam Price which has been mentioned to me a lot recently. I’m looking forward to reading it.

But, even more interesting was this book [Teach your Cat Welsh]. This is the sequel to Teach Your Dog Welsh which we’d first seen at Gwyn Sion Ifan’s shop, Awen Meirion, in Bala. Gwyn said he’d sold endless copies of it and that people seemed to find it an easy way to start learning Welsh (it has a pretty foolproof phonetic pronunciation guide). He also indicated that there was a feline sequel in the offing.

Strangely – or not so strangely, actually, to any Welsh speaking Welsh person – there’s a story about this book. While Edwina and I were staying with my family over the weekend, we got together with a couple of my old school friends and we mentioned ‘How to Teach Your Dog Welsh’. ‘Oh,’ said my friend, ‘I know the person who wrote that. In fact I and my colleagues helped her with the Welsh for ‘Teach Your Cat…’ Not only that but she ended up taking her cat to work so that she could be filmed for the S4C (Channel 4 in Wales) programme, Heno, to talk about her part in getting the book off the ground. 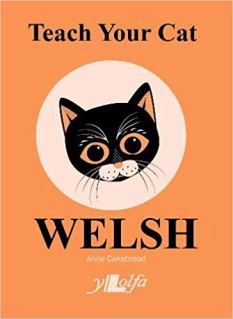 Doubtless, when I’m in Cardigan, over the next bank holiday weekend, I’ll buy Edwina a copy of How to Teach Your Cat Welsh so that she can practice on Izzy, our moggie.

Huge thanks to Llio and to Brieg for the warm welcome they offered me in Siop Y Pentan and for all the encouragement they offered for the series.