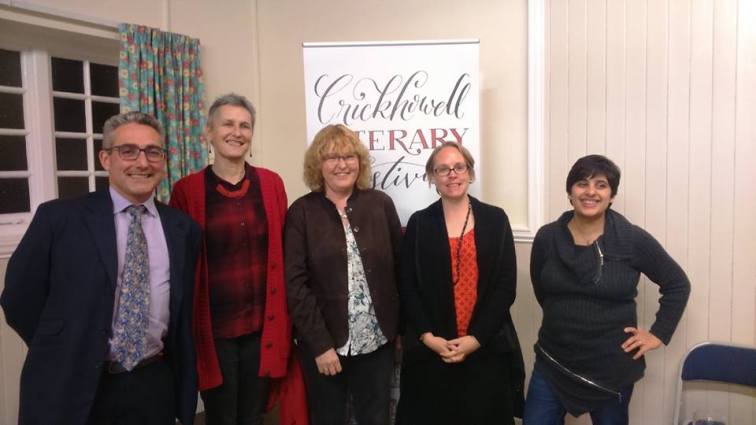 At the recent Crickhowell Literary Festival where I was lucky enough to be on a panel of Crime Cymru authors, our interviewer, Matthew Hall (who writes as MR Hall) asked an interesting question. Is crime fiction essentially something that has sprung out of the chaos of the urban environment? And, if so, is that a problem when we set crime in rural communities?

Interestingly, all the writers on the panel – Rosie Claverton, Katherine Stansfield, Jan Newton and I – had grown up in exactly that kind of community. For better or worse, none of us is under any illusions as to what rural life is like.

When my family first arrived in Ceredigion from South East Wales in the late 1960s, we experienced rural society at its very best. During our first summer, my father found himself laid up with a slipped disc at exactly the time when he should have been making his first lot of hay. Our future on the farm hung in the balance. My mother couldn’t do it by herself and my brother and I were four and three – hindrance, not help. It was at that point that our farming neighbours – who barely knew this new, young, English-speaking couple yet – quietly arrived and made our hay for us. Busy as they were with their own haymaking, they took the time to cut, turn, bale and cart hay from twenty of our acres and stack it safely in the barn.

When I tell that story elsewhere, people tend to look at me as if I’m making it up. But those farmers knew that if you couldn’t rely on your neighbours, any one of you could go under. If they’d been laid up, they would have expected no less of my Dad. And he would have turned out. No question.

But, of course, small, inter-dependent communities don’t constantly flow with the milk of human kindness. As Jan Newton pointed out in our panel discussion, in the kind of rural communities from which people tend not to move away, the dynamics between neighbours who have known each other all their lives, and who are well aware that they will continue to live cheek-by-jowl with each other for the rest of their lives, is utterly different from the dynamics of an urban population. If you’re forced to rely on others in the way that my parents were that first summer, you can’t afford to be falling out with them every five minutes. Or at all. You have to do your best to get along with everybody. Which means letting things go, not confronting, not getting up on your high horse and having things out. You just can’t afford to make enemies of people because tomorrow, or the next day, you’ll need them. And they’ll need you.

So you rub along, biting your tongue, when somebody who lives in a more socially mobile environment might march around and start dishing out pieces of their mind.

However, not everything can be let go. Not everything can be allowed to remain a secret, however open it might be. Some things need dealing with. In None So Blind we see the contemporary answer to things getting dealt with: the ceffyl pren. Communal justice meted out by the men and women of the locality after dark, cross-dressed and disguised so that actions could never quite be laid at particular doors.

But, ceffyl pren or not, sometimes, things got dealt with rather differently. Rather less publicly. Via the swift and permanent expedient of murder.

And because murder has, as Matthew Hall suggested, traditionally been associated with urban poverty and crime, it often went unsuspected and uninvestigated.

Which is fertile ground when you’ve invented a coroner who just won’t let things go.

You can read more about the mechanics of getting away with murder in 1850s West Wales here.