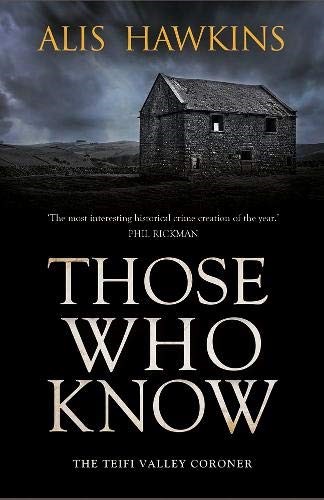 The third in the Teifi Valley Coroner series, Those Who Know sees Harry dabbling unwillingly in politics as he stands for election as Coroner for the Teifi Valley. To his surprise, he finds himself taken up by the Liberal party but it’s not just the Tories’ candidate he’s fighting against, it’s also the magistrates and the police force who would rather that their coroner were slightly less thorough – and expensive.

And party support doesn’t come without its downside. Jonas Minnever, Harry’s election agent, wants him out pressing the flesh and wooing the electorate, so when a sudden death is brought to his attention on the campaign trail, Harry finds himself in a bind. Does he give all his attention to the inquest as his conscience and his inclinations tell him he should? Or does he take Minnever’s advice, leave things to John, and confine himself to electioneering?

A middle-way compromise proves equally damaging to both causes and Harry finds himself going into the inquest on Schoolteacher Rowland’s death disastrously badly prepared. The inquest runs out of his control and the outcome threatens to see an innocent man hanged.

In the final week of campaining, as Harry tries to find a way of re-opening the inquest, his Tory rival suddenly disappears and new evidence comes to light which takes John off to London to investigate. What he discovers leads to an explosive election day and yet more pressure on Harry to act.

In a morally complex case where, it seems, nobody is truly innocent, what is the most just outcome?

(NB: due to closures caused by Covid 19, publication of the paperback has been delayed until September, but Those Who Know will be available to read on Kindle as of May the 28th 2020.)