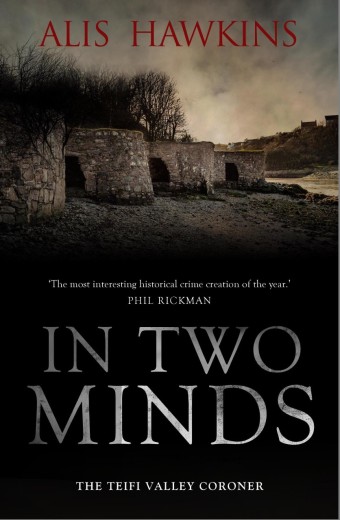 A naked corpse with no face turns up on an isolated Cardiganshire beach. An inquest is needed to establish both identity and cause of death but the coroner is dying. Fresh from his dogged and successful investigation into Margaret Jones’s death, Harry Probert Lloyd is asked to step in temporarily.

Ignoring his father’s opposition, Harry agrees, on condition that he may appoint his own coroner’s officer.

But John Davies, back at his old job in Mr Schofield’s the solicitor office, is not as eager to work with him as Harry expects.

And his assistant’s wariness is not the only barrier Harry has to face. As his investigations into the body on the beach begin, he clashes with the local police inspector and it soon becomes clear that he will receive no help from the constabulary.

Potentially most embarassing of all, Harry discovers that his own family is involved in this mysterious death.

Will Dr Reckitt’s eccentricity and mania for autopsy implicate Harry in further scandal?

Who is the powerful Mrs Parry and is the emigration scheme dreamed up by her and the shadowy ‘American Gentleman’ behind the death of the naked man on Tresaith beach?

And will Harry’s discovery of half-forgotten kinsmen end in embarassment, or worse, for his family?

My favourite reviews of In Two Minds

From Eva at book blog NovelDeelights – ‘In Two Minds is a gripping, compelling read and a brilliant addition to this series. I shall impatiently await the next book and very much look forward to seeing what happens to Harry and John next.’

From Julie at book blog Northern Reader – ‘This is a mature book which shows every confidence in being able to establish characters who have their own understanding of their situations, and how the physical setting of travelling by horse amid a challenging rural landscape affects the investigative process. Secrets, lies, pride and other barriers make this far from a straightforward murder mystery, and I once again learnt much about the legal system of the time. This is a totally absorbing book, as the narrative moves from crime to complicated family situations. I recommend it as a great read of real depth, and a another splendid tale of a man battling on all sorts of fronts to follow what he believes is the correct path. A really good read!’

You can read the whole review here.

From book blogger Shania Muha at The Shania Edit – ‘I thoroughly enjoyed In Two Minds. It is a richly imagined and extremely well-plotted book. I literally couldn’t put it down and read it in one sitting. In Two Minds is unpredictable, unique, engrossing and a real page-turner not to mention the shocking plot twists! I cannot recommend The Teifi Valley Coroner Series enough and I’m hoping for Book 3 to come out soon. In my opinion, to be 100% honest, this book or should I say series does not deserve less than 5 / 5 STARS. I HIGHLY RECOMMEND THEM!’

The whole review is here